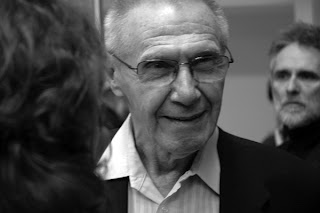 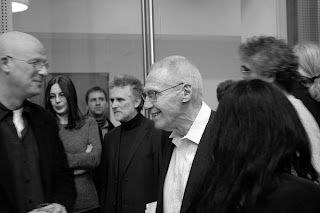 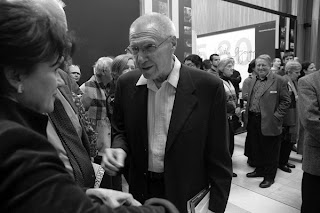 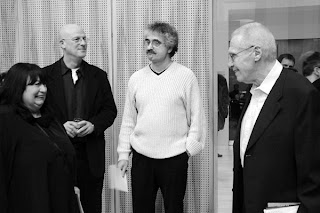 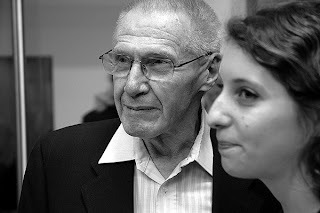 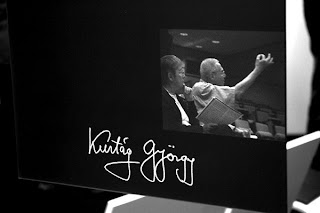 Gy. Kurtág at 80 - the composer's birthday celebtation in the Palace of Arts, Budapest, 2006

György Kurtág is a Hungarian composer of contemporary music. Is one of the more highly esteemed composers of the late 20th century. He is not well known outside of Europe, writing little and not prone to acts of self-promotion. Most composers would not have been able to establish a career in this manner.

"Born at Lugos (Lugoj in Romania) on 19 February 1926. From 1940 he took piano lessons from Magda Kardos and studied composition with Max Eisikovits in Timisoara. Moving to Budapest, he enrolled at the Academy of Music in 1946 where his teachers included Sándor Veress and Ferenc Farkas (composition), Pál Kadosa (piano) and Leó Weiner (chamber music).

In 1957-58 Kurtág studied in Paris with Marianne Stein and attended the courses of Messiaen and Milhaud. As a result, he rethought his ideas on composition and marked the first work he wrote after his return to Budapest, a string quartet, as his opus 1.

In 1958-63 Kurtág worked as a répétiteur with the Béla Bartók Music Secondary School in Budapest. In 1960-80 he was répétiteur with soloists of the National Philhamonia. From 1967 he was assistant to Pál Kadosa at the Academy of Music, and the following year he was appointed professor of chamber music. He held this post until his retirement in 1986 and subsequently continued to teach at the Academy until 1993.

With increased freedom of movement in the 1990s he has worked increasingly outside Hungary, as composer in residence with the Berlin Philharmonic (1993-1994), with the Vienna Konzerthaus (1995), in the Netherlands (1996-98), in Berlin again (1998-99), and a Paris residency at the invitation of the Ensemble Intercontemporain, Cité de la Musique and the Festival d’Automne."
(published by Boosey & Hawkes)

The Hungarian composer won the Kossuth Prize in 1973 and was honoured by the Republic of France in 1985, while his other awards include the Herder, Feltrinelli and Hölderlin prizes. He has spent the past decade and a half outside Hungary, settling in France with his wife in 2002.

Most viewed in last month 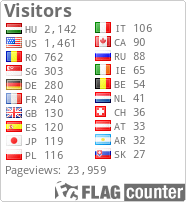